My name is George Upfield, I am 23 years old, and I’m a new ambassador for VICTA. I have been asked to write a short article on the subject of wellbeing.

I am visually impaired as the result of a brain tumour which crushed my optic nerves when I was nine. The tumour also damaged a part of my brain called the hypothalamus as well as my thyroid and pituitary glands. This means I have to take various medicines and steroids daily, and this has an adverse effect on my weight. To make matters even more complex, the damage to my hypothalamus has also affected the function of my appetite, and so I suffer from feeling hungry much of the time – even if I’ve eaten! 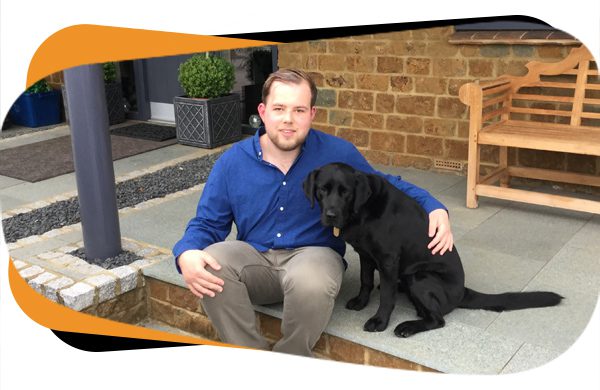 I am writing this article shortly after Christmas, a time of year when people have celebrated and often taken part in eating and drinking to excess. January is usually when these people seek to purge the weight they gained over Christmas and New Year. It’s often the case that they look to quick-fix exercise regimes and fad diets which, unfortunately, tend not to last. The fictional Fat Fighters group leader Marjorie Dawes of Little Britain fame, one of my favourite comedy characters, came up with one such diet …

“It’s the Fat Fighters half-the-calorie diet! What you do is, take your bit of cake and cut it in half. And, because it’s half the size its half the calories! And, ‘cos it’s only half the calories, you can have twice as much!”

From my own personal perspective, keeping an eye on my weight, if you’ll excuse the pun, has always been difficult because of my health issues, my love of food, my inability to participate for safety reasons in contact sports, and my dislike of exercise!

So, at a time of year when people make New Year’s resolutions, my advice would be to forget fad diets and quick-fix exercise that isn’t sustainable. Instead, it’s best to try and make a small lifestyle change that is more ‘realistic’, maintainable and achievable.

My family and I have always loved walking, and living in the countryside and having a Guide Dog called Yoko, means we generally go for a couple of walks each day. This was great as gentle walking was exercising me and Yoko but it wasn’t getting my heart-rate up or burning too many calories. So I decided to start making it a brisk walk – almost as if I was in a hurry – and then also to start running for a short distance on one of the walks; admittedly, I’m not running for more than two minutes at a time, but I do manage to get out of breath at the end of the run. Over the course of the last six months, since starting, I’ve been keeping to this regime and I’ve lost nearly a stone in weight.

Not only do I get a bit of a physical work out from this but I also see my walks as a means for contemplation, a time to take in the sights, sounds and smells, and on the morning walk to plan the day. I feel this has been really helpful for me and I would recommend it. I understand that not everyone lives in the countryside, but I’ve found walks around town can similarly offer a time and place for reflection amongst the hustle and bustle.

I generally walk with a friend or family member and have found this to be very beneficial too as you have someone to talk to. This is great for one’s wellbeing and mental health, as you can bounce ideas off each other and talk about problems, passing the time and making a walk more enjoyable and meaningful. After all, it’s a “Time To Talk”, as in the national awareness campaign.

So, to all VICTA readers out there who are thinking about making a change at the start of this New Year, my advice would be don’t be too ambitious – start off with one or two small changes that you know you can stick to, and give them time to work. Good luck!