24 hours of cycling, swimming and running!

The Birmingham Triathlon Club showed pure determination and endurance completing a 24 hour triathlon raising funds for their club and for VICTA. The team were inspired to support VICTA through team member Jack Garner. Jack, who is visually impaired himself, has attended VICTA activities and experienced first hand how our funds are put to use. In 2014 Jack attended our trip to the ‘International Camp on Communication and Computers’ which was held in Riga and also braved freezing temperatures in December on our Youth Weekend at Bala Lake in Wales. We are delighted Jack suggested VICTA to his team mates and that they have together chosen to support us.

Below Thomas Powell, who was key in organising the event, shares the club’s story. VICTA would like to say a huge thank you to all of the team for their hard work, what a fantastic achievement!

This year I’ve been elected as the media/fundraising officer on the committee for the University of Birmingham Triathlon Club. One event I have implemented was the ’24 hour Triathlon Relay’ in which funds raised were split between the club and the charity VICTA. VICTA was suggested by Jack who has benefited personally from your charity and who is a big inspiration to us all!
The relay consisted of 8 hours swimming in the Munrow pool, 8 hours running overnight in the Vale and 8 hours of cycling around local roads, with at least a few club members taking part at any one time! 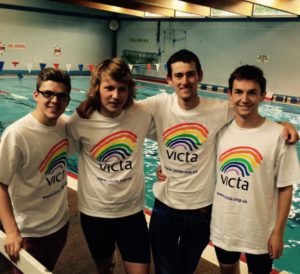 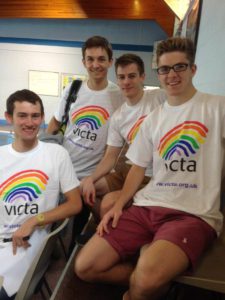 There were some magnificent performances, most notably Mark Goodhead who completed the full 8 hours cycling, with some thinking that this outstanding effort may come at the price of crippling his legs for the remaining triathlon season!

Overall this event involved over 40 club members, alumni and coaches, which constitutes a significant percentage of the club. Through every individual collecting sponsorship money and the raffling of generous donations from HUUB design, More Mile and Rebecca Hair (Physiopheraist) we managed to raise just under £800 (with a few donations from local clubs trickling through this will hopefully take us up to £1000). This will make a massive difference to the club as well as to the charity we were raising money for. 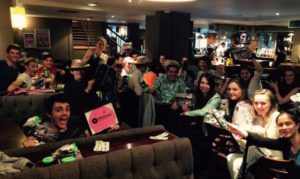 I’m incredibly proud of everything we managed to achieve this week and would class it as my best achievement in sport to date. I’m massively thankful to VICTA for all the collection buckets, t-shirts, balloons etc. that you supplied us with. They were fantastic in promoting the event around campus! All in all it was a hugely rewarding and enjoyable event to organise and the club would love to continue to support VICTA in the future. 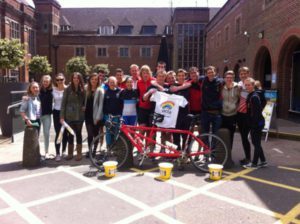