Climbing the Matterhorn for VICTA 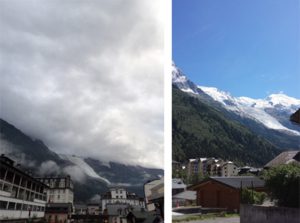 It a was gloomy and rainy evening in Chamonix when I arrived. However, undeterred by these short lived weather conditions and fueled with excitement and a determination to carry out my charity climb and environmental research I started my preparations. The BBC weather forecast proved to be correct and the morning was bright and sunny. My climbing partner, our local guide and I arrived at the foot of our first summit index situated just next to the town. Despite starting in sunshine, the weather threw a few tantrums our way in the form of clouds and we had to negotiate our progress almost by touch. 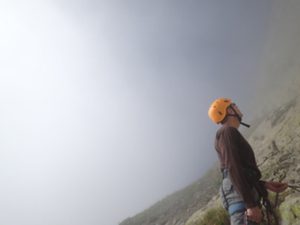 Having overcome all 250 vertical meters of our first acclimatisation accent we successfully reached the summit. Mighty Mont Blanc can be seen in the background in the photograph below. My contribution into clearing the environment (the Alps in particular) started at this moment. 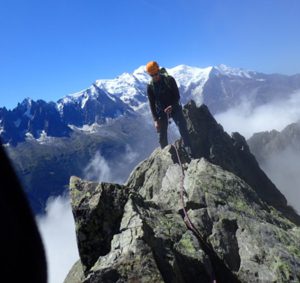 My project aim was to conduct a study on waste management at high altitude and assist in the physical removal of waste. The idea for this study in the Alps came to me after talking to a climbing friend who told me about the heaps of abandoned equipment and rubbish at the Everest base camp. My planned climbs were situated in three different neighbouring countries: France, Italy and Switzerland, therefore it was a good opportunity to compare waste management in these countries.

As I began my research I met up with Nikos Hadjis, a representative of the Mountaineering Spirit Guides (MSG) based in Chamonix, who had kindly agreed to help.
The next day we moved to Courmayer in Italy, which was the starting point of our next acclimatisation climb and booked into Torino Hut which stands at 3,375m above sea level. The picture below shows the sunset that I enjoyed from the terrace of the hut and might provide a satisfactory answer to the old question of why people go to the mountains. 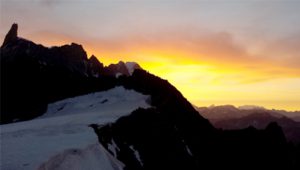 In the morning we started by crossing the glacier towards Dent du Geant, our next summit and next point of my research. Despite being on a glacier and surrounded by snow, it was August nonetheless, and it was hot… and the destination was still far away. 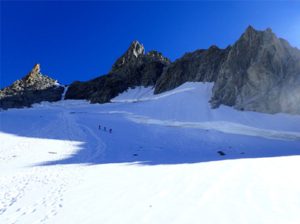 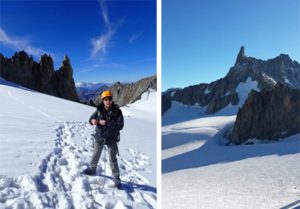 I could not believe my luck when, on our way back from the site of carnage to the Torino Hut just leaving the glacier, Nick and I bumped into a living ‘climbing legend’, Ueli Steck. I seized an opportunity to talk with one of the world’s most daring climbers.

After such an inspiring encounter with a legend and having seen a cleaning operation in progress our entire group moved to Switzerland in anticipation of the main event, the Matterhorn climb.
Previously I learned that the Swiss take environmental issues very seriously and they have a well established policy of recycling. The first glimpse of our starting point Zermatt confirmed this. The pedestrian town where only a few electric buggies are allowed to ferry children or old/disabled tourists about looked like a fairy tale.

Then began the two and a half hour walk from the top station of the cable car to the Hörnli Hut, the starting point of our climb. The hut was completely renovated for the 150th anniversary of the first ascent and was re-opened in July, so upon arrival I went for an inspection of the surroundings. I expected to see the same devastation I had witnessed just two days earlier at the Torino Hut. But there was none of it. Everything was squeaky clean and tidy.

Having shaved an hour off the walk to the hut, I was pretty sure that there would be no hiccups on summit day. As I learned later, that was my arrogance talking!
After a sleepless night (due to excitement and the altitude) we rose at 4am, hoping to shine but altitude sickness had different plans for us all. 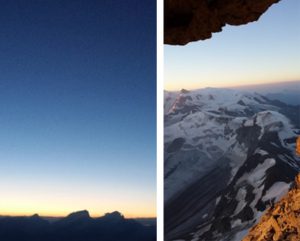 In order to summit we had to keep gaining 350 vertical metres per hour. For the first hour and a half I was pushing myself as hard as I could, but the lack of acclimatisation and oxygen started to show and after two and a half hours Nikos and I reached the Solvay Hut at 4,003m altitude. Sadly, this was as far as I could go.

The Matterhorn climb has a special strategy to it and every climber has to realise that descent from this particular mountain is harder than the ascent, and thus takes longer. Apart from the altitude sickness, we simply ran out of time.
At Solvay Hut, I finally had a chance to sport my charity T-shirt as my other mission was to raise money for VICTA, a charity that supports children and young people who are blind or partially sighted. 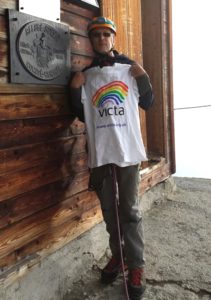 After clearing the rubbish from the hut and around it, Nikos and I started our long and painful descent, during which I continued my mission and collected as much waste from the mountain as I could. Nikos and I continued our descent and finally came to the set of fixed ropes at the bottom of the climb. The ropes are fixed on the face of the wall in order to save time at the early morning hours, in my case at 4am.

This is a brief account of my environmental/charity expedition, from which I conclude that many of the earth’s environmental problems (part of which is littering) stem from a lack of people’s awareness, understanding and education.

I would like to express my gratitude to the Atelier Ten foundation for supporting my project and everyone who made donations for VICTA.