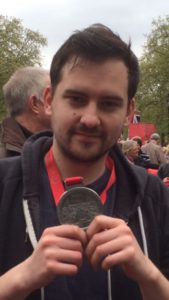 Two years prior to running the marathon, I had suffered a large pneumothorax (collapsed lung). Although not a huge runner prior to this, I had been interested in running & taken a few short distance runs (including a 10k). The pneumothorax, however, truly knocked the wind out of me to the point where even walking was tiring. Subsequently, I just became unfit, overweight and started to lose my confidence.
A move 12 months ago to London for a new job was the push I needed to get me motivated and make a change. It was my partner at the time that suggested a marathon (we were in the crowd at the 34th marathon in 2014 at the time). Being a “go big or go home” / “all or nothing kind of personality” I took up the challenge of running a marathon.
I applied that night, choosing VICTA to run with as I wanted to raise the profile of a smaller charity that was doing some amazing work for a fantastic cause.
August is when I found out that I had secured a place … It was a mix of excitement, fear and regret at first!

Training was hard to get into, but very soon I was enjoying… yes: enjoying!… running 8-10 mile distances. Then the injuries hit! 3 in total… shin splints and persistent tight glutes were the wear and tear injuries, but the ligaments I tore in my foot jumping off a curb in Hackney almost spelled disaster for the big day!

By the time the day came, I was ready. Nothing was gonna stop me! The injuries were behind me, but I only had 17 miles as the max distance under my belt. I was a tad worried… then I started running – the crowd was AMAZING! I’d been told before I ran that the marathon really shows the kindness of strangers: people you’ve never met cheering you on and feeding you jelly babies!

The first 19 miles were fairly ok, the energy from all the cheers, high fives and even the mouthful of Strongbow I got was boosting my stamina, relieving my pain and pushing me along… 21 miles, however: that’s when the pain hit hard. It wasn’t going away this time. I was slowing down and struggling to keep myself motivated. The crowds were thinner by this point and I was desperate for a rest. Then, as if they knew I needed them, my brother and sister appeared at the side of the road: “go on Sie!” They even started running along with me, keeping the pace from the pavement.

Although they weren’t with me long, I was renewed. The next few miles were mine for the owning! The crowd at Westminster helped keep that going until I was 200 metres from the finish… “This is it” I thought, “your last chance to show this marathon who’s the boss!” BOOM! My legs were like rockets, my arms swinging wildly, and my face was painted with determination … I roared over the finish line. 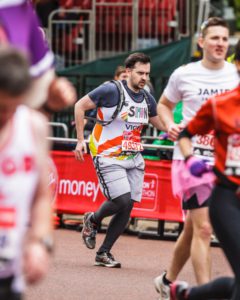 With the injuries I had faced during training I anticipated I would probably land between 5hrs and 5hrs 30. 5hrs 18 mins was my time. I’m no Paula Radcliffe, but I finished incredibly proud of what I’d achieved and ready to run again and smash my time next year!

Thank you so much to VICTA for the chance to run and for showing their support as I paced round the track. I saw a Team VICTA supporters at least 10 times round: and you were the loudest, most enthusiastic supporters of the bunch – part of my achievement goes to the wonderful people behind the charity who helped make the day even more enjoyable! I hope to have the opportunity to run for you again soon!