Dinosaurs by the sea!

VICTA’s first Family Weekend of 2016 saw us travelling down to Weymouth to stay at PGL Osmington Bay. It was VICTA’s first trip to Osmington Bay and we were not disappointed. The views of the Jurassic coastline were stunning, and the weather couldn’t have been kinder with the sun shining all weekend. 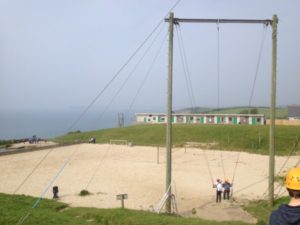 We had 40 families attend, and for over half of these it was their first taste of a VICTA family weekend. It was great to see so many new faces, as well as catch up with old friends.
The children got stuck in with the outdoor activities first thing on Saturday morning and didn’t seem to stop until they had to leave on Monday! Zip wire, rock climbing, abseiling, raft building… the list of ‘favourite’ activities goes on and on. For the parents, Saturday started slightly more sedately with helpful seminars about setting up a Parent’s Network, and writing an EHCP. We were very pleased to have the EHCP seminar run by Andrea Davis from Blind Children UK and educational solicitor Gurvinder Kaur. They also both ran one-to-one sessions in the afternoon to give parents a chance to ask more specific questions relating to their child’s EHCP.

The afternoon offered parents an opportunity to receive a massage, as instructed by two fabulous RNC students, and get involved in a goalball taster session. The massages were particularly well received by those who had been flinging themselves around the goalball court!

On the Sunday everyone had a chance to be involved with many of the activities that PGL has to offer. The children continued to exceed the expectations of parents, staff and volunteers, with their bravery and ‘can do’ attitude.

The much anticipated party on Sunday evening was a great success, with many people participating in the fancy dress competition. There were a lot of fearsome dinosaurs boogying along to the ‘Makarena’ later on in the evening.

As Monday lunch finished there were more than a few tears shed, mobile numbers shared and photos taken, as everyone started to head home. We’re sure that the friendships made this weekend will be a great comfort and support to children and parents alike.
As always, we couldn’t have done it without our band of volunteers who threw themselves into everything that was asked of them. The encouragement, care and support they showed to all the children was greatly appreciated by all.