On August 9th, I was lucky enough to win the opportunity along with five other young visually impaired people to have dinner at Le Gavroche, Michel Roux Jr’s restaurant. Having never been there before, I was really looking forward to seeing what it was like. Although VICTA have been running the competition for several years, this was the first time I had attended the event. When we arrived, Michel took us downstairs to have a tour of the kitchen. As soon as I got in there, I could hear the various machines that were being used to cook the different food. It wasn’t busy when I was in there, but I got the impression that there could be quite a buzzing atmosphere at peak times. 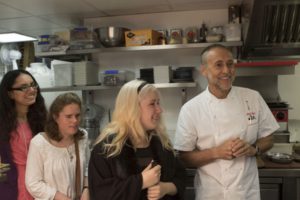 While I was in the kitchen, I held a live lobster which I found interesting. It was much bigger than I expected, and very heavy. As I traced my fingers along the shell, I could feel tiny barnacles on it which gave me some idea of how old the lobster was. The claws were tied with elastic bands, but I still managed to get a sense that they were very long and sharp. Holding the lobster was definitely one of my highlights of the day because I’d never touched one before, and was delighted to be given the opportunity to do so. I was pleased I wasn’t going to be eating it though! 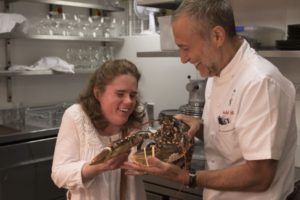 When we left the kitchen, we went along to the ‘Chef’s Library’ where we ate the meal. I took my seat at the marble table and waited for the food to be served. The meal began with some light canapes, which consisted of houmous on cracker and pissaladiere. I also had a piece of ciabatta bread which I enjoyed. 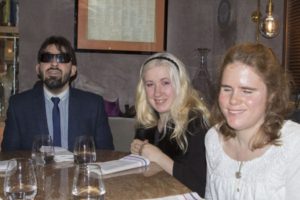 We were then served a starter of Dorset crab salad with sweetcorn and cucumber. The sweetcorn had been charred, and I thought it tasted similar to popcorn. The crab had a very delicate flavour, and I could tell that it had been freshly prepared.

Following this, the main course was brought out which was Canon Herdwick roast lamb, crushed potatoes with broad beans, roasted carrot and a thyme jus. Lamb isn’t my favourite type of meat, but I had a pleasant surprise when I found that it was very tender and melted in my mouth when I ate it. I know I would certainly enjoy lamb a lot more if it was always that tender! The crushed potato and roasted carrot went well with the meat, and the addition of broad beans added extra flavour to the potato. 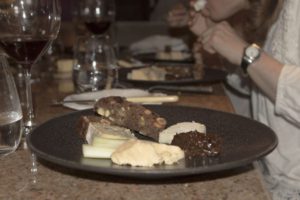 Next we were treated to a selection of three British cheeses which were served with celery, chutney and nut and raisin bread. I am a huge cheese fan, so I was particularly looking forward to this part of the meal. My favourite cheese out of the three was the Davidstow Cornish cheddar. It had been matured for five years, and tasted extremely strong. I thought it was absolutely delicious, and it was definitely the strongest cheese I’ve ever eaten. The other cheeses were a blue cheese called Perl Las and Bosworth Ash, which was a Welsh goat’s cheese. These were also excellent, and I especially liked the Bosworth Ash because it was rich and creamy. 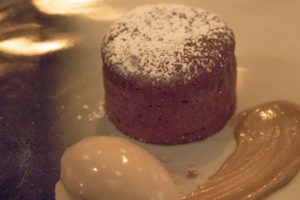 Another food I love just as much as cheese is chocolate, so I was delighted when the dessert that was served was a chocolate fondant. It was warm and had praline in the middle. The fondant was served with gianduja ice cream which made it taste even more delicious because it melted into the chocolate. I thoroughly enjoyed the fondant, and it was a perfect way to finish a very special meal.

Overall, I had an amazing experience and Michel Roux Jr and the waiters treated us very well. The meal was wonderful and gave me the opportunity to be adventurous and try some different food I wouldn’t normally eat. I got on well with the other members of the group and enjoyed meeting other visually impaired people that were a similar age to me. I had a fantastic day at Le Gavroche and will remember it for many years to come.