VICTA recently awarded ‘The Change Foundation’ a grant which contributed to them being able to travel to Nepal for the first ever international female visually impaired cricket match.

The Change Foundation (the new name for ‘Cricket for Change’) is a charity which aims to use cricket as the means to change the lives of disadvantaged and disabled young people. Four years ago their development officer Beth Evans went on holiday to Nepal where she met an inspirational group of young ladies who made up the only female visually impaired cricket team in the world. Their energy and confidence inspired Beth to come back and create something similar for the young women she worked with and the group began fundraising with the aim of travelling to Nepal to play the Nepalese female visually impaired team. 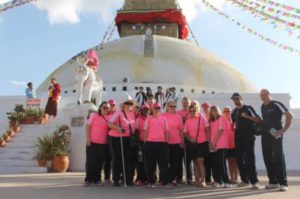 Highlights of the trip included a cable car ride to the temple Manakamana in Gorkha, training at what seemed to them, the most picturesque cricket ground in the world in Pokhara and visiting a school for the visually impaired where they spoke to the girls about blind cricket. The group also enjoyed their evenings and soaking up the atmosphere from the on-going festivities being celebrated for Diwali. 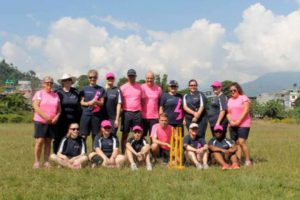 After their stay in Pokhara the group returned to Kathmandu ready for the first match against the Nepalese female VI team. The opening ceremony consisted mainly of Nepalese dignitaries (Nepal blind cricket officials and members of the Nepalese Government) all saying a few words about how wonderful it was to be hosting this inaugural cricket tournament. Beth was also asked to say a few words which brought most of The Change Foundation party to tears. Many exciting runs followed, culminating in the Nepal team taking the trophy and an important milestone being reached in the development of VI Cricket in the UK and Nepal. There then followed a post-match ceremony and The Change Foundation captain was called upon to sum up her thoughts about the game at which she did very well. 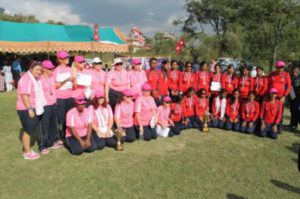 The aims of the tour had been to give the girls experience of life outside their usual environment, to play cricket in a different country, to improve their self-confidence and to have the experience of a lifetime. All of the above was achieved and much, much more. The women and girls learnt so much every single day. Each of them grew in independence across the tour and did things for themselves and others that they would not do in the UK. Seeing how the Nepalese girls live and get around each day pushed the UK team to prove what they could do for themselves. Since the tour many of the girls have embarked on challenges they may not have had the confidence to consider before, such as being interviewed for radio, attending training weekends, trying new activities and travelling independently. The trip not only taught the UK team valuable life lessons, but also encouraged teams and women throughout the world. Pakistan have now set up a team and Australia is showing a keen interest in developing a side. 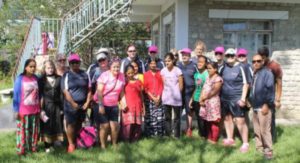 “I wanted to send out a massive thank you from the bottom of my heart for support VICTA gave towards our recent tour to Nepal. It was truly ground-breaking and life changing for so many of us on the trip and without your support it would not have been possible. You truly helped some of these young women and girls make a difference to their lives and to many around the world, because of this tour Pakistan now have a women’s blind cricket team with many other countries, especially Australia also looking to develop female blind cricket. The impact this tour has made has been incredible, almost too hard to describe to you, however we have tried. On behalf of the UK’s first female visually impaired cricket team – Thank You”
– Beth Evans

You can watch a video by the International Cricket Council about the tour here: http://vimeo.com/112176846